So, ARE there limits to evolution?

Cambridge plays host to many meetings each year but few as unique and ambitious as the “Are There Limits to Evolution” conference that took place over two sunny days this September. Professor Simon Conway Morris and his team from the Department of Earth Sciences at Cambridge organized the conference, which was set in the scenic and stimulating backdrop of St John’s College. Nearly 30 speakers from all over the globe and from many different scientific disciplines shared their answers to the deceptively simple question: Are there limits to evolution? Speakers and delegates alike were rigorously challenged and enjoyed being part of a fascinating effort to articulate the key areas of research that will define the future of evolutionary biology. 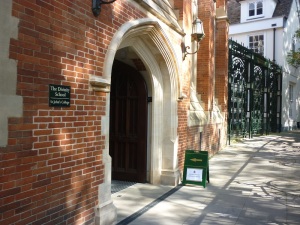 Professor Simon Conway Morris commented that “All conferences have something new, but this one was special both because it brought together an extraordinary cross-section of leading scientists, from physicists to biologists, and because it looked to the problems rather than the solutions. That is a rare synergy.”

Dr Victoria Ling, an expert in anthropology and science communication, ran the conference and in parallel a series of interviews with key speakers. These interviews allowed the team to record the opinions of leading biologists, philosophers and physicists on the future of evolution, as well as aspects of their life stories as scientists. Footage was skilfully shot by Peter Harmer and Mark Jones and will be available to view on a new explorative website being created in partnership with The District and to be launched in 2015. Watch this space (and follow Map of Life on Twitter or Facebook) for updates.

Convergence at the conference

Although hard to choose just a few, highlights from the conference that relate to convergent evolution are given below:

Eugene Koonin’s research on the fluid genomes of prokaryotes includes finding independent origins for three groups of giant viruses of prokaryotes. Virginie Orgogozo looked at changes in large effect genes of known function between closely related species, and found lots of convergent ‘genetic plagiarism’ (e.g. optix genes in Heliconius butterflies and lateral transfer of carotenoid genes in pea aphids and spider mites). George McGhee explored the limits on helical bryozoan colony form, showing how the key adaptation of water filtration efficiency poses a limit on colony form, as observed in the fossil record. Robert Asher focused on burrowing mammals, a dispersed group including the widespread talpid moles, golden moles of Africa and marsupial moles of Australia. The remarkable hearing of golden moles is based on inner ear specialisations that while beneficial when burrowing, limit colonization of aquatic habitats.

Walter Salzburger mentioned some of the most striking cases of convergence among the iconic cichlid fishes, a group known for astonishing and yet constrained diversification. Geerat Vermeij, Russell Powell and others pointed in different ways to the general need for understanding the contraints on development when assessing convergent traits at different levels in the tree of life. Jonathan Losos expanded the classic case of convergence provided by Anolid lizard ecomorphs (link to Mol) by showcasing the truly convergent lizards alongside a few unique anoles that add questions about contingency, constraint and novelty in ecosystems. Josh Mylne described an incredible instance of protein convergent evolution based on research into a sunflower gene (PawS1) encoding a precursor seed storage protein. PawS1 contains a sequence for a trypsin-inhibitor (SFTI-1) with a cyclic inhibitor motif also found in distantly related legumes, cereals and even frogs.

What of the hot topic of human evolution? Anders Sandberg and Geerat Vermeij both pointed out that humans today effectively exist apart from natural selection and that as intelligent agents with technology we can change the ‘goals’ of evolution. Chrisantha Fernando described how neurons and networks in the brain appear able to learn and evolve, showing varied degrees of plasticity. Peter Kjaergaard shared research into the many origins, Neanderthal and otherwise, of today’s Danish population. Richard Wrangham described a model connecting incomplete development of so-called neural crest cells with a syndrome of traits related to selection for reduced aggression (domestication). He suggested that humans are self-domesticated, with certain traits such as smaller brains, less male-female dimorphism and lifelong learning being inextricably tied to the selected trait of reduced aggression as our species evolved to co-exist in great numbers.

If you’d like to treat your brain to an array of angles on evolution, a few books recently published by key participants at the conference include:

And finally, if you would like to immerse yourself in everything human evolution, Peter Kjærgaard and others are delighted to announce the very recent opening of the new Moesgaard Museum in Denmark. Map of Life already loves it…